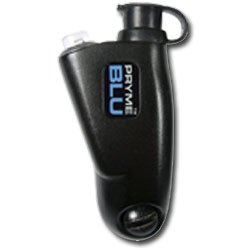 The PRYMEBLU® PTT allows you activate your radio’s Push-To-Talk function wirelessly, when using a PRYMEBLU® Adapter and paired Bluetooth headset. The BT-PTT can be held in the hand, worn on a lanyard, or secured to just about anywhere using the Velcro® fastener! Easily attaches to your duty gear, automobile steering wheel, or any convenient location!

Compatible with all PRYMEBLU® adapters (including models for both portable and mobile radios.)