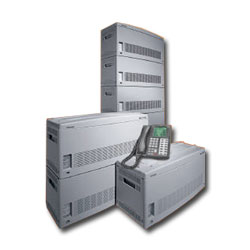 1 per system. Requires either RCTUA, RCTUBA/BB, RCTUC/D, or RCTUE/F.
Complex Features Made Simple - Sophisticated features don't help if your people won't use them because they're too complicated or cumbersome. That's why the Strata DK424 is designed with the end user in mind. For example, LCD feature prompting makes feature access and use easier by displaying simple, clear instructions on the telephone's LCD screen. This reduces training time and makes sophisticated features less intimidating. And, for the features your employees use most often, user programmable buttons can automatically perform sequences of feature operation at the touch of a button, saving time on every call.

Multiple Directory Numbers
Toshiba's Strata DK424 implementation of multiple DNs provides the level of flexibility and call coverage options that rival those found in a PBX environment. In essence, multiple DNs allow station directory numbers to appear on multiple telephones, and individual telephones can have multiple appearances of their own station directory numbers. Each DN is fully functional to originate and answer calls.

Automatic Number Identification and Caller Identification
In addition to Multiple DNs, the Strata DK424 provides Automatic Number Identification (ANI) capabilities. ANI takes advantage of digital or analog DID and TIE lines to display a calling party's telephone number on the ringing telephone's LCD. When ANI is coupled with a computer application, information such as the calling party's phone number, name of the calling party, calling party's call record history, etc., can be presented to the called party simultaneously with call answer. In addition, this information can also be used by separate computer applications to generate reports or call backs. ANI is a service available through many long distance providers of digital (T1) or analog DID and TIE lines.

Similarly, the Strata DK424 also supports Caller Identification which provides the calling party's number and the caller's name (if provided by the local Central Office). Caller ID is a service offered by local Central Offices on ground or loop start lines. Again, Caller ID, when linked to a computer application, provides detailed information to create a powerful database of customer accounts and prospects. Caller ID is supported on the Strata DK424 in conjunction with the Caller ID interface PCB.

Computer Telephony Integration
Computer telephony integration (CTI), quickly emerging as a business necessity, is an important capability supported by the Strata DK424. With an optional RS-232 digital telephone port, a Strata DK424 digital telephone can be easily connected to a PC to facilitate information sharing between the telephone system and computer.

Toshiba's CTI implementation supports the industry standard TAPI specification developed by Microsoft. This support for TAPI allows users of the Strata DK424 to take advantage of a range of off-the-shelf CTI PC TAPI-compatible applications. One common application uses Caller ID/ANI capabilities to identify the calling party and display the caller's file on the computer screen as the telephone is ringing.

Other Features
Other features supported by the Strata DK424 include Dialed Number Identification Service (DNIS) which identifies the telephone number dialed by the calling party regardless of which line the call comes in on; that number and a name stored in the DK424 are displayed on a digital telephone's LCD for answer prompting. Call Park Orbits, which improve paging and call pick-up from anywhere in a facility, is also supported. Automatic Call Distribution and other features inherent in the Strata DK424 combine to improve call handling and system flexibility, making this telephone system ideal for a wide range of businesses.

Toshiba Digital Telephones
Toshiba digital telephones are available in two colors, and a variety 10 and 20 button handsfree or LCD speakerphone configurations, including a 900 MHz cordless digital telephone, allowing you to match the telephone to the application. For specialized answering, we offer an add-on module, DSS console, attendant console with color CRT display, and a door phone. The Strata DK424 allows your people to make more efficient use of their telephones and take full advantage of the system's capabilities, improving communication among your employees as well as with your customers.