Cordless phones are by far one of our best selling products. Cordless phones offer portability and versatility that you just don’t get with a corded phone. With new improvements in technology, the sound and security of cordless telephones now rival those of corded ones. And quite often you will find that cordless phones offer a great variety of advanced options. But with so many models to choose from, where does one start? Our cordless phones buyers guide will help you decide which phone is the best for you. So let’s get started! 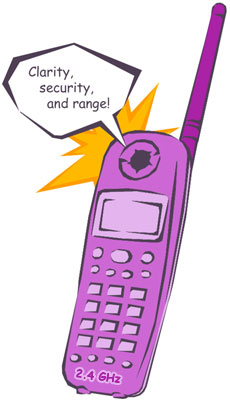 Many people equate a higher cordless phone frequency with a better range. However, the way in which wireless technology really works is a bit more complicated than that. There are three important factors to consider when talking about the quality and strength of a cordless phone’s signal: interference, obstructions, and output wattage.

We live in a sea of wireless signals. Cellular phones, cordless phones, radios, pagers, and other wireless devices are constantly sending and receiving signals in the air around you. Even devices that don’t talk to each other, like microwaves, refrigerators, TVs, and computers, emit low-band interference which can affect cordless phones in the 46-49 MHz bandwidth (found in a few of the least expensive cordless phones). Interference occurs when two or more devices use the same frequency at the same time. The FCC regulates which devices are allowed on each frequency.

The first cordless phones utilized the 46-49 MHz bandwidth. As more and more people bought cordless phones, it became apparent that a new frequency would be needed. The FCC responded by opening the 900 MHz bandwidth. Previously reserved for military use, 900 MHz provided consumers with improved range and clarity. Cordless phones became even more popular and once again interference became an issue. If you have ever overheard a neighbor’s conversation, you know exactly what we are talking about here. The solution to this problem was to open up yet another frequency: 2400 MHz (AKA 2.4GHz).

The 2.4 GHz frequency band is recommended in most cases for the best possible clarity, security, and range. The only exception to this rule is the EnGenius, a long range cordless phones that far exceed most cordless telephones in range.