Introducing CorroShield, the highest level of protection against the corrosive effects of humidity, saltwater, chemicals, water, dirt, and other contaminants. Now the patented product that the world’s largest carriers have standardized on for voice line service has been expanded to provide both voice and data connection protection. Applications are far-reaching from high humidity basement and kitchen installations, to entire communities in inland and coastal locations.

Suttle’s family of CorroShield products is designed to deliver improved performance and reduced service calls through increased connector reliability. During manufacturing, a specially formulated gel is applied to all surfaces at risk of contamination, completely surrounding the gold contact wires. When the voice or data cord is inserted, the gel forms an airtight seal around the connection, preventing corrosion and other contact problems.

The unique memory characteristics of the CorroShield gel continue to deliver long after installation. When the voice or data cord is removed from the connector, the gel will return to its original position, maintaining the airtight seal for up to one hundred insertion events.

How CorroShield Protects Your Connections 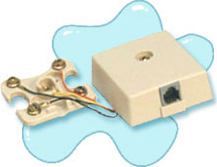 The 625C cover may be used to retro-fit an existing 020031 (4 conductor) or 020045 (6 conductor) terminal block, converting it to accept modular plug-ended line cords. The jack contacts are protected with GelGuard (tm) gel, and a captive retaining screw keeps the cover securely fastened, preventing damage to the assembly. This series is designed for mounting on baseboards, walls or other flat surfaces. 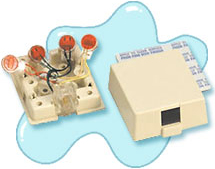 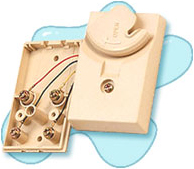 The 625SA series of surface mount jack assemblies features a 625T jack cover. This cover consists of a modular 4 or 6 conductor jack, protected with GelGuard gel, mounted inside a thermoplastic cover. The back of the jack is protected with a plastic barrier, sealing the rear of the jack cavity, except for a small wire entry hole. The binding posts have also been removed on the base for critical applications where Scotchlok connectors are desirable, eliminating another point of corrosion. The front modular jack opening is covered by a notched, spring-loaded, rotating access cover which protects the jack interior from contamination by dust, dirt and liquids. The access cover swings aside to permit a modular plug to enter the jack; when it swings back again, the notch fits around the plug-ended line cord, retaining the plug and also providing strain relief. 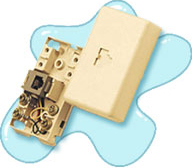 The 625MT jack assembly provides easier access and greater flexibility in a baseboard jack. The compact size and low profile fit the narrow baseboards found in many residences. The jack opening, equipped with GelGuard gel, faces outward for easier customer access and the spring-loaded cover prevents entry of contaminants when the jack is not in use. 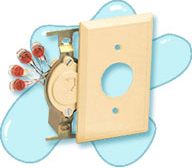 625B
The 625B type utilizes the 19E faceplate and the 43C mounting bracket with the 625F jack module. Packaging includes two mounting screws for attaching the assembly to prewire boxes with 1-7/8” center to center mounting attachments.

625B2E
The 625B2E type utilizes the 16A faceplate and the 60 ring with the 625F jack module. The 625B2E may be mounted in prewired installations utilizing the 63A junction box.

625FS
The 625FS features a swinger type spring-loaded rotating cover, preventing entry of contaminants when the jack is not in use and also providing strain relief when the plug is inserted, to prevent pull-outs. The 43C mounting bracket, included, can be mounted on standard electrical boxes or prewire boxes.

625B4
The 625B4 modular jack plates are designed for RJ11 type installations. They can be flush mounted or installed on existing boxes without a mounting bracket. They can also be surface mounted in the 625MB mounting box.

This series of flush mount duplex jack plates allow multiple terminations in one plate, with the jack contacts protected with GelGuard(tm) gel. The 625B series features "over and under" 6 position sockets, while the 625D series offers "side by side" 6 position sockets. The 625B3 may be flush mounted on a standard outlet box without the use of a mounting bracket. The 625D utilizes the 43C mounting bracket, or the 625MB mounting box may be used where surface installation is required. Duplex jack plates offer spring-loaded trap door options in the 625B3 versions. 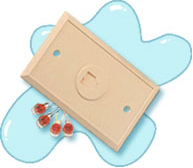 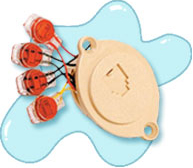 16150
The 16150 surface mount outdoor jack features a cover that permits a plug-ended line cord to be inserted, while still assuring a moisture-resistant seal. The cover may be rotated to the position desired for easy wire access. A station wire entrance coupling contains a neoprene bushing for added protection, with wire entrance available from top, bottom or either side.

19316L7
The 19316L7 surface mount outdoor jack features removable mounting tabs. The tabs can be used on either side, depending on your specific application. Various wire entrances are possible. A coupling containing a neoprene bushing allowing a water-tight cord grip is also furnished. Conduit or pipe entrance can be made by removing the 1/2" threaded pipe nipple.

The 625B3 EF4XXRC floor jack is a duplex unit. The floor jack was designed for optional mounting arrangments where original configurations are not applicable. It incorporates a center tapped mounting hole, as well as 3-9/32" center to center mounting holes. The jack contacts are protected with GelGuard gel and the jack is also equipped with a spring-loaded protective door which operates in horizontal as well as vertical mounting arrangements. This floor jack is available with screw terminations, and is a 4-conductor configuration. The 860A faceplate may be used as a cover for the 625B3EF4XXRC, and that is sold in our Traditional product line.

The 630 wall mount jacks are available in 4 or 6 conductor configurations, with the jack contacts protected by GelGuard gel. This series offers stainless steel or plastic plates, with or without a riser plate. For surface mounting, mounting lugs are provided for installing modular wall telephone sets. Color-keyed inserts are included to replace the mounting lugs when desk telephone sets with modular plug-ended line cords are to be used. 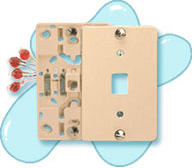 630B4
The 630B4 utilizes quick-connect terminals. The station wire is connected using retaining clips, which snap onto the terminal board to connect and retain the individual station wire conductors. After termination the entire terminal block is enclosed in a plastic wrapper to prevent corrosion and shorting due to condensation or incidental moisture. Packaging includes installation instructions and two 1" flat-head screws for mounting.

630AP
The 630AP features a snap-on plate that conceals and protects station wiring after termination has been made.

630AC
The 630AC type wall mount jack features, in screw termination part numbers, a terminal board which incorporates screw terminals for termination of station wiring. The jack is completed with a plastic face plate.

Corro-Shield 4 conductor line cords offer an unmatched level of protection against corrosion. GelGuard(tm) gel is placed at the area of greatest risk - the splice where the line cord and the plug wires are joined together. By injecting GelGuard gel into the plug, corrosion is prevented from traveling back up the cord. The cords are available in 7, 14 and 25 foot lengths. The cords are plug-ended at both ends and are available in two styles: The "WRC" designation has one filled plug; the "WRC1" designation has both plugs filled with GelGuard gel. 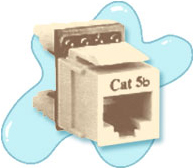 The 648C8A5 and 648C8B5 snap-in jack modules utilize a printed circuit board design with 110 IDC terminals. The modular jack contacts are protected with GelGuard gel. The units small size of less than one square inch allows greater density in plates and jack panels. Snap-in mounting reduces time and space required for installation. The 110 style IDC terminals are mounted on the back side of the housing allowing quick secure termination of 22-24 AWG station wire.