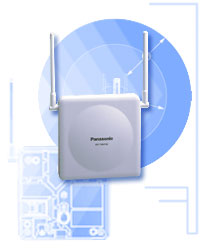 Choosing the best site for the Cell Station requires careful planning and testing of essential areas. The best location may not always be convenient for installation. Read the following information before installing the unit.

Characteristics of Radio Waves: The transmission of radio waves and the Cell Station coverage area depend on the structure and materials of the building. Office equipment, such as computers and fax machines, can interfere with radio waves. Such equipment may create noise or interfere with the performance of the PS.

The illustration shows the special transmitting patterns of radio waves.

Relationships Between Radio Waves and Building Structure and Materials

The example below shows the size of the coverage area of 1 Cell Station if it is installed where there is no obstacle.
Note: Radio signal strength levels are measured during the site survey.

1. Obtain the map and investigate the installation site.

2. Examine the service area demanded by the user on the map, referring to the following example.

Example: Installing in a Room Separated by Walls

Things to take note of:
Back to Top

Setting and Installing the Cell Station Temporarily for Site Survey

1. Switch the Radio Signal Test switch from OFF to ON.
2. Set the Cell Station number switches as desired.

Connecting a Cell Station to the PBX

Refer to the following example to connect a Cell Station to the PBX: