A truly affordable IP-PBX for the SOHO (Small Office Home Office) market, the Vdex-40 is an Asterisk-based IP-PBX appliance that will support up to 35 telephones. Vdex is a hybrid PBX phone system interoperating with the telephone and Internet networks to offer the best of both. Operating a modified version of popular Asterisk4 software, Vdex provides both PBX and advanced voice over Internet (VoIP) functionality.

For highest reliability, Vdex-40 is a fully embedded system using flash memory, with no spinning hard disk drives or noisy fans which are prone to mechanical failure. The Vdex-40 is the first ever asterisk appliance to feature dual cpu's - one for back end processes and one exclusively for voice quality and codec processing.

It features four built-in FXO ports for direct connection to POTS/PSTN lines (regular phone lines) and can support additional lines using SIP trunking. Vdex does not require Internet connection. If the Internet “goes down” Vdex still performs as a PBX and messaging system, placing and receiving calls to and from the telephone network. When connected to the Internet, Vdex is additionally a VoIP gateway providing access to lower-cost and free calls, call routing over the Internet to remote phones, offices and others connected to the Internet anywhere in the world.

Compared to traditional phone systems, Vdex-40 can do so much more than simply receive calls, put callers on hold and transfer. Standard features include: multiple automated attendants, conference bridges, remote extensions, multi-location bridging, mobile extensions with laptop soft phones and voice mail forwarding to e-mail. Try asking any non-Asterisk based system to do the same, especially at a small office price!

While the Vdex-40 was designed for the SOHO market, it still maintains the same flexibility and extensibility as other Asterisk based systems, but it offers much more at a much better price: four built-in FXO ports for phone lines, hardware based codecs with G.711, G.723.1, G.726 and G.729a/b, hardware based G.168 echo cancellation and most importantly two different processors for separate handling of call processing from voice processing.

Call capacity of an embedded Asterisk-based telephone system is highly dependent upon not only hardware architecture but also configuration and concurrent resource activity. For example, performance under load will vary dependent upon such factors as (but not limited to): 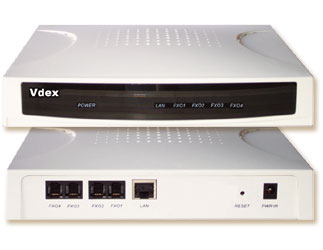 Vdex-40 has been tested to support approximately twice (70) the number of users/extensions specified above (36) making simultaneous SIP calls to another like number (70) of SIP extensions. This is irrespective of whether RTP payload is either routed through the PBX or routed directly between SIP end points. Further tests with a variety of other load factors operating concurrently, such as (but not limited to) IVR activity, shows Vdex supporting the stated capacity of 36 while also supporting other resources such as IVRs sufficient to support inbuilt FXO ports.

Vdex-40 is the first Asterisk-based Appliance in the world to maximize voice quality by implementing multiple ARM processors dedicated to the separate processing of voice and data, Vdex’s architecture also includes as standard, additional digital signal processor(s) for the compression of voice and cancellation of line echo on the FXO ports. Vdex is a fully embedded platform using flash memory to replace spinning hard disk drives, and with no fan requirement the potential for mechanical failure is further minimized.

NOTE: Viewing PDF documents requires the free Adobe® Reader® version 5.0 or greater.If you don't already have it installed, you will need to download and install it before using PDF documents.